In 2001, Hope Roehrs weighed nearly 300 pounds and elected to have gastric bypass surgery, helping her to lose 130 pounds within ten months. After the surgery, Hope ate less at each meal, but her choices of food were still unhealthy. Her poor eating habits over several years caused her to regain 80 pounds. In July of 2013, she started working with Nick Kentrolis at The Crest Health and Fitness Club. He helped her tone her muscles while instructing her on nutrition, and by March of this year, she had reached her weight goal. 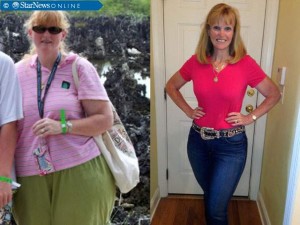 Her motivation for change stemmed from her realization that major health problems would begin creeping in at her current morbidly obese weight, and that she desired to regain her health and strength in order to be around for her grandchildren. Hope was fed up with hearing herself make excuses, and realized she needed to take action and responsibility for her weight and her body.

With the help of Nick at The Crest, Hope feels she has been given her life back and is much more confident in her skin. In addition to Hope’s new slim figure and improved health, she no longer requires her blood pressure medication and boasts dropping to a size 8 from her original size 28.

Hope loves the Zumba classes at The Crest with our instructor Laura, and she also lifts weights 2-3 times each week along with enjoying a daily walk or bike ride in the evening with her husband Tim, whom she says is her number one supporter.

Fitness is key in obtaining a weight goal, but in order to maintain your healthy weight, you must change your eating habits and improve your nutrition intake. Hope loves food and has learned she can still enjoy treats, just in smaller amounts. However, she has also learned that many healthy foods are delicious or can become delicious when incorporated into a meal. At The Crest, our members not only receive personal training for fitness and weight management, but they also receive nutrition coaching and suggested meal plans to help them on their path to sustained, long-term health and vitality.

If you haven’t checked out The Crest Fitness Club yet, there are no more excuses for waiting or procrastinating. We offer a 3-Day Free Trial that includes many of the perks our regular members enjoy with no obligation to join at the end of the trial period. One of the best nutritional assets at The Crest is our Phuza Juice Smoothie Bar located right inside our fitness center. With so many tools and so much support available from one location, you gotta come to check out The Crest Fitness Club in the Lumina Commons!